HISTORY OF THE JOE SEWELL AWARD 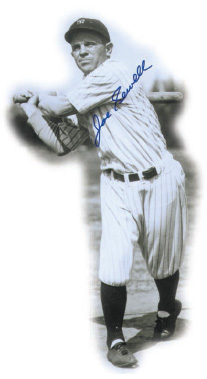 This award is named after one of Elmore County’s professional athletes who displayed leadership and Christian character both on the ﬁ eld and in his home community of Titus, Joe Sewell. Sewell still owns two of Major League Baseball’s records for the single season fewest strikeouts in both 1930 and 1932 as well as the lifetime record of fewest strikeouts during his 14 year career. While he excelled on the ﬁ eld, Sewell was known as a quiet man of character and conviction who  gave back to his community as often as he could.

The purpose of the Joe Sewell Memorial Award is to recognize outstanding high school senior athletes who have consistently represented the highest ideals of Christian leadership and emulate the character of Joe Sewell. Each participating high school nominates up to four senior students for this award. The Joe Sewell Memorial Award Board of Directors names Finalists from that list of nominees. Students are then evaluated on the criteria of excellence in athletics, academics, leadership, and church, community, and character, as well as a panel interview conducted by the Board. One male and one female are selected as the overall Joe Sewell Memorial Award recipients. Each of those students receives a $3,000 John Sewell Scholarship. One male and one female are also selected at the Category Winners for each of the four categories listed above, and each is awarded a $1,000 scholarship. 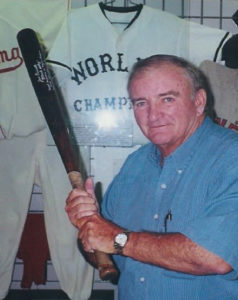 John Sewell was a cousin of Joe Sewell who was dedicated to the game of baseball and making a positive inﬂ uence on young people. After a successful business career, John spent almost all of his available time working with young people. He admitted his greatest weakness in life by saying, “I just can’t say no to a kid that wants to play ball. I’ll do anything to help him.” In 2000, John went on a mission to ﬁnd his cousin’s famous bat. When it was found in Birmingham, John had the opportunity to hold it and make the connection to his famous cousin from years past. John continued to coach and be a part of youth baseball until his death in 2003. He was a resident of Coosada, and his wife Billie serves with the Board of Directors.

The John Sewell Scholarships presented to students each year are fully funded bydonations from local businesses and individuals who want to encourage excellence in Elmore County students and support the furtherance of their education. The scholarships for students would not be possible without these sponsors’ participation each year – for their generosity, we are truly grateful.

Even for all of his athletic feats, it is the character of Joe Sewell that this award seeks to emulate as well. He was known as a quiet man of character and conviction. During the depression, Joe was known on several occasions throughout the years to bring baseballs, gloves and bats to the kids of Elmore County. He loved the game and wanted other poor kids from the South to have a chance to learn the game and the sportsmanship that accompanied it.

Joe Sewell was born in Elmore County’s Titus community in 1898. Most die-hard baseball fans know of the legendary Joe Sewell. However he stood in the shadows of some of baseball’s giants in the game – Babe Ruth, Lou Gehrig and many others. He played for the Cleveland Indians and New York Yankees in his career from 1920 to 1933. Sewell was inducted into the Baseball Hall of Fame in 1977 and died in Mobile in 1990.

Joe Sewell still owns two of Major League Baseball’s records, records which most fans of the game say will never be broken. He holds the lifetime record for fewest strikeouts at bat during his 14 year pro career – 114 in 7,132 games. Sewell holds the single season record for fewest strikeouts at bat of just three strikeouts in 640 games in 1930 and 1932. A left handed hitter who threw right hand-ed, Sewell was a speedy shortstop who led the American League in ﬁelding twice and putouts and led the league four times in assists.

When it came to hitting, no one matched Joe Sewell. Few rookies then and even in today’s modern era faced a tougher assignment or more pressure than Sewell did in 1920. While Sewell was play-ing his ﬁ rst professional season in New Orleans right out of college (Alabama), Cleveland Indians hero Ray Chapman was killed by a Carl Mays’ pitch in August. When Chap-man’s replacement was hurt on Labor Day, the kid from Alabama got the call and was thrust into one of the most heated pennant races ever in the American League. “Little Joe” as he was called (5’7’’), proved equal to the task, batting .329 for the rest of the season in helping the Cleveland Indians to their ﬁrst American League Championship pennant.

From September 13, 1922 to April 30, 1930, he played 1,103 straight games – a major league record at that time, and only surpassed by his teammate, the great Lou Gehrig. He and his younger brother, Luke Sewell, are still ranked 8th on baseball’s Most Career Hits list for brothers. Sewell used a 40-ounce bat called “Black Betsy’’ during his entire career. That bat rests now in the Alabama Sports Hall of Fame Museum in Birmingham.

After retirement he spent several years coaching for the Yankees. He later was a scout for the Indians. He was head baseball coach at his alma mater, the University of Alabama, for several years leading the Tide to an SEC title in 1968. Alabama’s baseball stadium is named for him.